I mean really–he’s creepy. But she isn’t!

Meet Holly. Now isn’t she a sweeter option? And a perfect stocking stuffer for the little ones. She’s all yours–go here to see her in my Etsy shop!

You don’t get to be a “jack of all trades, master of none” by always doing the same thing.

True for my crafting career, and now also true for Greenberry Street.

We’re back, and our Etsy shop is actually open! Right now, I have a few sweet sewn baby dolls for sale, but I haven’t left my paper crafts behind! More paper items will slowly be appearing in the shop, too.

So, if you have a little that would love a doll for Christmas, head on over and check out the listings. And come back soon as we grandly reopen!

Since my last post, I have enjoyed a week off from work, a few days away with my man, watched a few baseball tournaments, had my last pottery class, considered signing up for NaNoWriMo, and kept on stitching. I finished this one a few days ago: 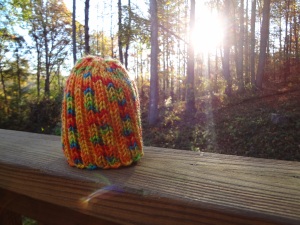 This is another hat to be sent to We Are Kenya, courtesy of Craft Hope. It will join the two others I already have, a felt teddy bear that is nearly finished, and maybe two more hats (if I can finish them before the deadline).

If anyone is curious, the yarn above is Premier Yarns Ever Soft Multi in Beach Day, and the pattern is from the Knit Simple Magazine, Holiday Edition 2006. (Yes, I still have a copy–in my craft room :-))

Once upon a time, there was a girl. This girl started a business, and a blog to chronicle her adventures. The business got a Big Client, and this girl was very busy fulfilling orders. And blogging occasionally.

Then one day, the orders were finished and the girl said, “Well, that felt like an assembly line. That wasn’t fun at all.” Coincidentally at the same time, the Big Client went on maternity leave and was never heard from again.

So here we are, a few months later, and I am not where I thought I would be at all. I am in a new role at my “real” job (which is a great thing), and Greenberry Street is essentially out of business.

Sort of. But that is a story for another post.

But, the crafter in me isn’t finished, just because I’m not cranking out orders for customers anymore. A few weeks ago, I saw a Facebook post from an organization I follow, Craft Hope. Basically, they are like a big charity crafting group, who chooses a new charity (or Project, as they call it) every so often. And this time, their Project is a group called “We Are Kenya.”

I was so stinkin’ excited, I started making some of all the items they asked for. (Because if you didn’t know, I am a jack of all crafts, master of none. And, I spent time in Kenya in 2012–slight recap here). So, in the past four days, my life looks something like this:

I’m on a crafting spree!

One and a half-hats knitted, another one earmarked for giving, yarn and patterns for at least three more, plus the cutest little felt bear you ever saw. I have quite a stack of felt, and those are going to be SO quick–we’ll see how many of them I can finish before the deadline. (The twin-sized quilts had already been spoken for, or that would be on here, too!)

So, all I can say is Greenberry Street (the shop) is on hiatus for the time being, but the crafting certainly isn’t!

I have been crazy busy on a big order, so that’s why I haven’t been very social the past few days. But for Tutorial Tuesday, I wanted to share this tutorial from Lia Griffith for Tissue Paper Poppies. She is truly one of the most inspiring paper flower artists I have found, and she just shared this with her readers this week. I can’t wait to try this one myself! (Image from Lia Griffith) 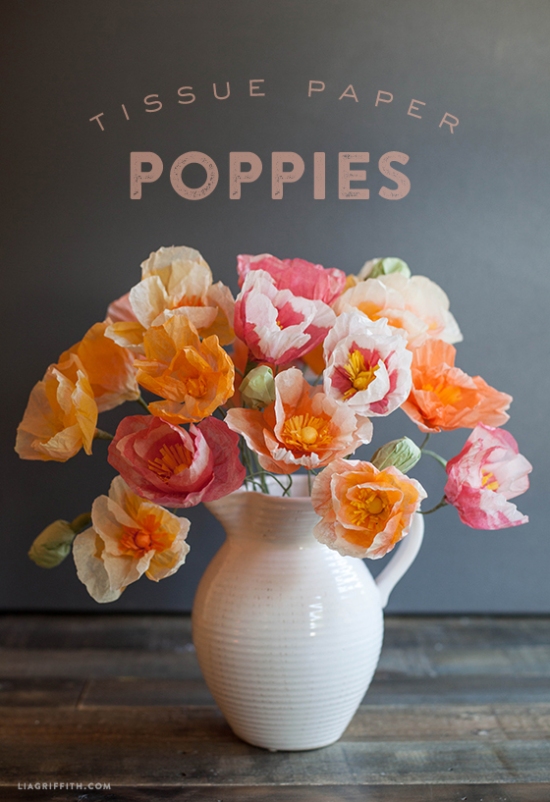 Now hop on over to her blog and check it out!

I am about to show you a ridiculously easy DIY project, and then maybe THE easiest DIY of all time. These will work in your office, as a gift–even as wedding decor! And you seriously won’t believe this. Ready? GO! 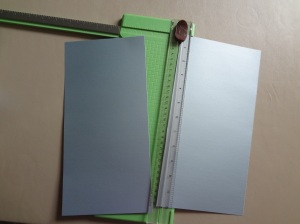 Cut it to the right size…

Give it a little paper flower for panache!

That’s it. Really! I am using a 6″ x 6″ art canvas, but I call it a tile. I cut my chalkboard paper just a smidge short, maybe a millimeter or two, just so the paper doesn’t go all the way to the edge of my tile.  Spread a little glue (but not too close to the edge or it will squeeze out when you smooth it and make a sticky mess), and press it into place on the tile. Presto! Pretty chalkboard decor!

You can make multiples and mount them on the wall using double-sided mounting tape to make a decorative message board in your kitchen or office. Use different colors and alternate them like a checkerboard, like Martha Stewart did here (with paint right on the walls).

Another option for your super-easy finished piece: you can take your tile and put it in a plate stand. Grab a piece of chalk, write a message, and either use it as decor with maybe a meaningful quote or a drawing. Or, option #3….

…turn it into a Sentimentile! It’s a twist on a homemade greeting card. In my Etsy shop, opening soon, I will have some of these for sale, that include a completed back with room to write a personalized message to your recipient. 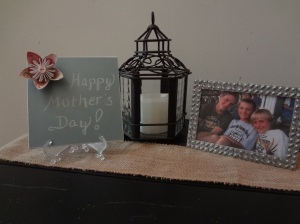 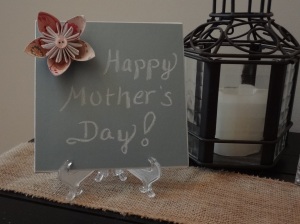 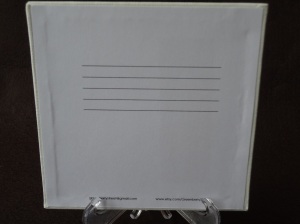 Ready for the REALLY easy one??

And for my super easy bridal project for a DIY bride, or one on a budget, use it as table decor!!

So, that’s it for Tutorial Tuesday. I hope you visit again soon–I love visitors!!

And if you make one of these, would you leave me a comment and maybe a photo? I’d love to see what you create!

When this is what I get to play with, how could I not love what I do?? 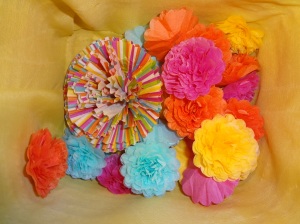 This is a basket full of Colorful Springy Happy!

This is a basket full of Stripey, Springy Happy!

I’m going to tell you a secret.

I make paper flowers. (That’s not a secret.)

I launched Greenberry Street almost on a whim (like I talked about here). Truth is, this has been percolating in my brain for years. Literally, years. I can see some of the first pins I ever made over on Pinterest and they go to ancient links.

If you could see those boards, you would also see tons of wedding ideas. I made the boards private because my real-life friends would be like, “Why are you pinning all this wedding stuff?”  I wasn’t ready to tell anyone back then, so I didn’t.  But while I am getting started with arrangements in the hospital gift shops, and am thankful for the opportunity….

….I really want to be in the bridal industry.

If you’ve ever met me, then you would know that I am a hopeless romantic. I adore the epic love stories, like Gone With the Wind and Titanic.

You’d also know that I make things. All kinds of things. And all those pins? They’re not just paper, or flowers. They are favors, photo backdrops, illuminated signs, decor–many ideas, many potential products, many crafts.

And I want to combine those two aspects of me.

So even though I am still waiting on that first “Accounts Receivable” from the hospital to be marked “Paid in Full,” I already have expansion plans. I know I must be a special kind of crazy, but I want to do weddings!

So, if you see wedding posts and shares on here, now you know why.  Greenberry Street has a Bridal Line! (or will, once I create it! 🙂 )

So what do you think–am I crazy?

Doing a wee bit more organizing today, I noticed a symbol on this storage box lid. Can you see it? 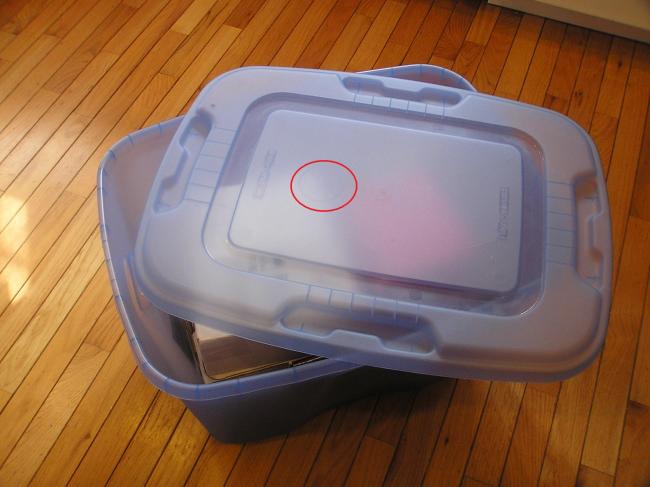 Good thing I never tried to stuff my kids in there. Apparently that is a no-no!!

I think I need an assistant to write down the million things that are going through my brain.  Any takers? Required skills:  mind-reading.

Seriously, while my craft room is practically finished, my mind is charging ahead into all the things I need to do.

I have a WordPress challenge coming up to help me get the blog off the ground. I’m reading a WordPress guide on my Kindle, paper copies of “The Martha Rules” and “Craft, Inc.” in my backpack. I’m also toting around every notebook I have ever scribbled a thought in, apparently–and adding more daily. I have clippings of events I want to be part of next year, to-do items written on random scraps of paper, and project ideas for about three different mediums scattered on my dining room table.

To an outsider, I’ll bet it looks like a bit of a mess.

Running a business requires a lot of you, in every possible sense–and I’m sure I don’t know a fraction of it yet. And while it sounds a wee bit overwhelming, I am loving every minute of it!